Does the NFL communicate well?  Here is the perspective of a former NFL player who has a Communications degree. 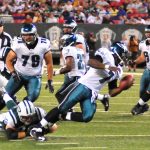 Marketing is always about the consumer; the trends, the lifestyle, location and bottom line, will they buy? The 2010 buzzword is freakonomics; we live in a “gotta’ have it” and “gotta’ have it now” society. When it comes to the National Football League, their desire is to give you all of the excitement with all of the purchases and merchandise that you can handle as a consumer. Freakonomics is a coining term for the “super fan.”

A September 9, 2010 broadcast on MSNBC (2010) reported that the NFL intended to “pink it and shrink it” with a new market to attract the female consumer market. This campaign, lead by Ms. Bleczinski, Vice President of Marketing for the NFL is the latest in the campaign to be present in every area of consumer “wants” for football fans, especially fans of the feminine type. Female NFL gear is truly a “want” or passionate desire for merchandise because no one “needs” a pink jersey with Number 9 of the New Orleans Saints, quarterback Drew Brees, yet just about every female on the Bourbon Street has one. (MSNBC, 2010) Of course as every in-house marketing executive will inform you, the advantage is to keeping control over the “brand.” Yet there is not a question as to whether the NFL has made a bid to capture the attention and the buying power of women for themselves and as one can imagine their household sponsors such as phone products, food, chips and beverages, all of which are purchased in majority by women.

The NFL is extremely careful to market and publically push its superstars on and off the field, but when disaster strikes, it is careful to counter the negative and shower the situation with diversifying positive media as in the case of Ben Rothlisberger of the Pittsburgh Steelers.

Ben Rothlisberger, the Superbowl quarterback of the Pittsburgh Steelers was accused for the second time within a year of sexual misconduct with a female implying assault. (Owners Edge, 2010) When the incident happened the female voice was very definite in its position and elicited this response by the NFL.

The AP reports that the Steelers players have been notified by coach Mike Tomlin that the team is instituting a zero-tolerance policy in regards to off-field misconduct. “We were told early this morning either you get in line or you get kicked out of line,” offensive tackle Willie Colon said. “You are going to be traded or you’re not going to be here. If your conduct is going to play a part in you not being a good football player, they are going to get rid of you. There is a zero tolerance, not only with the NFL but with the Steelers.” However, Mike Tomlin, never one to discuss internal matters, denied making that statement.

How this will affect the Roethlisberger suspension is uncertain, but it seems to re-inforce to rumors that Big Ben is available on the trade market. We don’t expect him to be anywhere else but Pittsburgh next season. Hopefully, the warning is heeded by the remaining members of the roster. Santonio Holmes has already been traded this offseason due to off-field issues. (Owner’s Edge, 2010)

The owners of the Pittsburgh Steelers, the Rooney family, Roger Goodell (League Chairmen) and the coaches of the Steelers swiftly took a stand against condoning any violent behavior or aggression toward women. This was not only the morally correct position to take, but it was a powerful action to protect the market of public relations and the fan base of women and children attached to the league and the sports legends who play for the NFL. This was very effective in the broad market, but the number of pink #7 jerseys suffered no doubt.

On April 21, 2010, the very same day of Ben’s suspension, Indianapolis Colts defensive tackle Eric Foster was accused of sexual assault with a front-desk clerk before the AFC Championship. No doubt this was bad news for Roger Goodell, but the staff waited for the police to report that there was no basis for the allegations before making the announcement, “we have zero tolerance for these situations, but Foster will remain on the squad as the police have cleared him.” (Digital Sports Daily, 2010, para. 8) The NFL has a very good communication policy with the public for speaking when necessary, promoting where necessary and disciplining where the situation demands reparation.

The “Back to Football” marketing platform targeted the households and the purse strings of women to corner at least fifteen percent of the merchandise market. (Terry Lefton, 2010 para. 5) While according to Lefton that at the licensing show in Las Vegas about many of the NFL merchandise products one thing was evident; marketing to women had the “halo effect.”