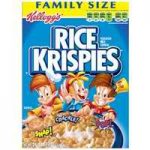 A federal lawsuit alleged that Kellogs claimed that Rice Krispies boosted the immune system of children.

This is not the first claim against Rice Krispies and what is important here is that watchdog type companies and Attorney Generals and their staffs are policing advertising.  For those of you who do graphics or design for any packagaing, you need to be aware of the rules here.

Health claims are serious business.  Any writers, artists and producers who are working with food and health had better keep up with the regulations imposed and especially if you are working with products for youth or children

The Attorney General of Oregon agreed in settltment with Rice Krispies to a 2.5 million dollar cash settlement and that Kellogs would destroy the boxes of 2 million units of cereal and donate the cereal to the poor through charaties.  Under the terms of the suit, Kellogs admitted no fault.

If you think it sounds a little steep…think of this…who could think of thisas something that does not promot helath and well being!Recently Kellogs reched a 10.5 million dollar settlement over its Frosted Mini Wheats and claims of health benefits.  Kellog has now been banned from making any health claims about any of its products.